With a world’s worth of options, settling on your next holiday destination can be tricky, but these top tips on where to go – and where to avoid – will help you prioritise those bucket list items.

The wanderlust-themed wisdom is courtesy of Fodor’s Travel and its newly released Go and No lists for 2023, as well as a rundown of the ‘most incredible hotels in the world’.

Holiday hotspots such as Cornwall in south-west England and popular states in the American West, including Arizona, Nevada and Utah, appear on the ‘No’ list, which flags destinations that travellers should reconsider visiting for ethical or environmental concerns. Meanwhile, Fodor’s ‘Go’ list gives the green light to travel to destinations such as Rye, England; Cairns, Australia, and Wilmington, North Carolina. When it comes to the unique hotels to check into around the world, Fodor’s recommends spending the night at Borealis Basecamp in Alaska and London’s The Twenty Two, among others. Scroll down for the lists in full…

Fodor’s Travel has released its Go and No lists for 2023, as well as a rundown of the ‘most incredible hotels in the world’. Cornwall appears on the ‘No’ list, falling into the category of ‘Suffering Cultural Hotspots’. Above is the county’s Polperro Harbour

A total of 10 places, divided across three categories, have made their way onto the ‘No’ list for 2023.

Cornwall falls into the category of ‘Suffering Cultural Hotspots’, as Fodor’s says that traffic ‘plagues residents’ of the county and that a housing crisis there is being ‘fuelled by short-term vacation rentals driving up the cost of living’.

Another destination to make its way into this category is Thailand. Fodor’s notes that on the island of Koh Tao, a tourist user fee came into effect this year partly because tourism activities have put a strain on the isle’s tropical marine environment. 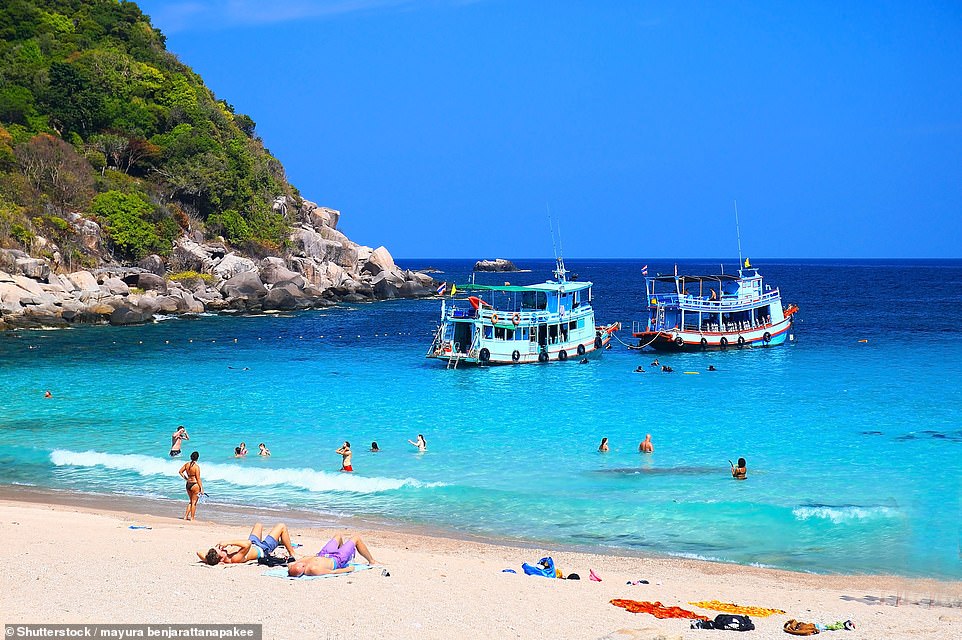 Thailand sits in the ‘Suffering Cultural Hotspots’ category of the ‘No’ list. Above is the Thai island of Koh Tao, where tourism activities have put a strain on the marine environment

The American West, meanwhile, goes in the category of ‘Destinations Suffering From Water Crises’.

Fodor’s says that in Utah, ‘throngs of national park visitors and the growing tourism sector are responsible for the highest per capita water usage in the country’.

Maui, Hawaii, also appears in this category – tourism accounts for the biggest usage of water on the island, and native Hawaiians, says Fodor’s, are paying the price and having to restrict their own use of water. 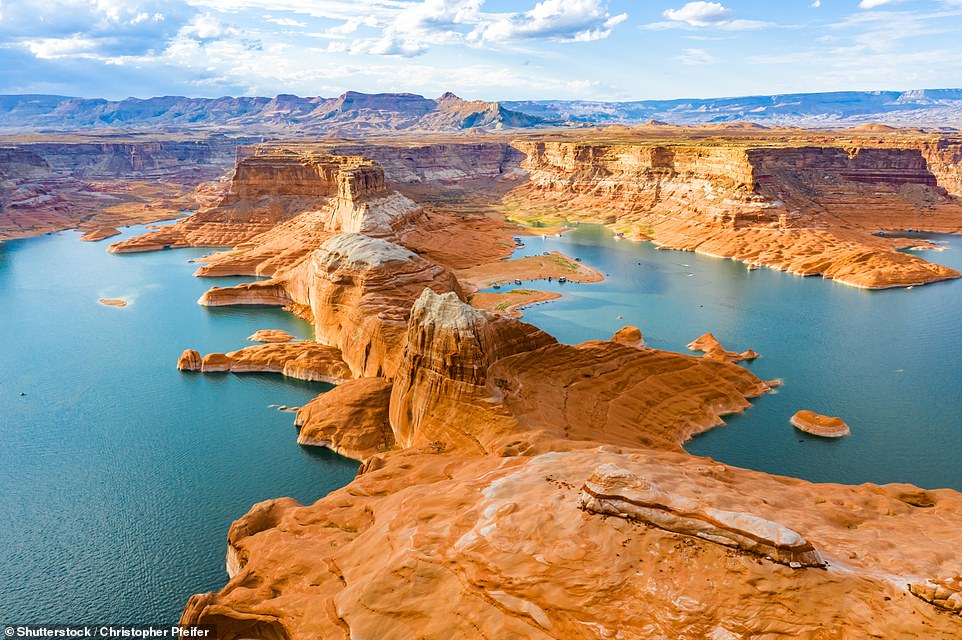 The American West goes in the category of ‘Destinations Suffering From Water Crises’. Above is the region’s Lake Powell reservoir 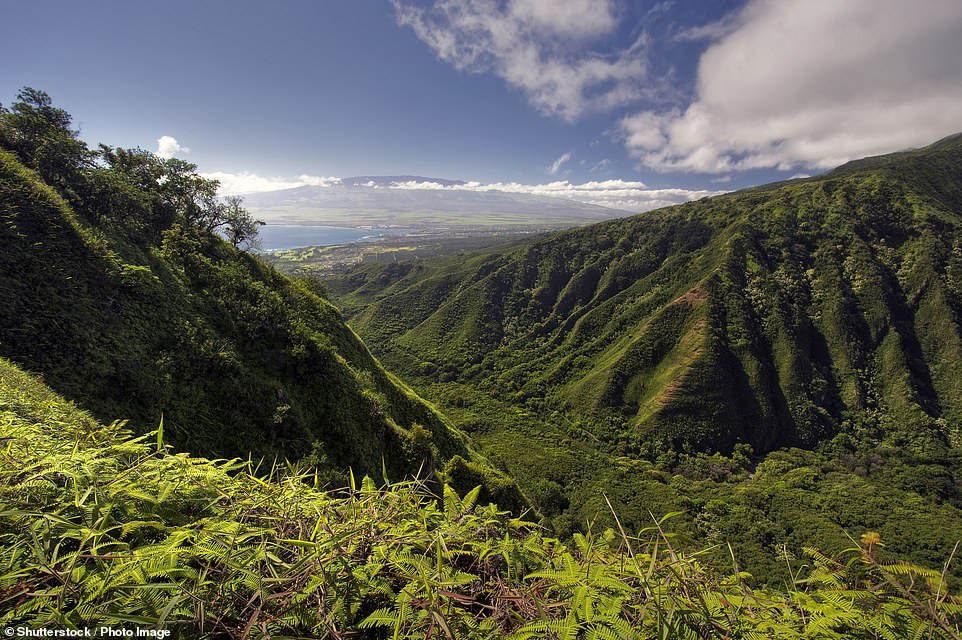 Maui, Hawaii, is suffering from a water crisis, says Fodor’s, as tourism accounts for the biggest usage of water on the island, and native Hawaiians are paying the price and having to restrict their own use of water. Above is the island’s Waihee Ridge trail 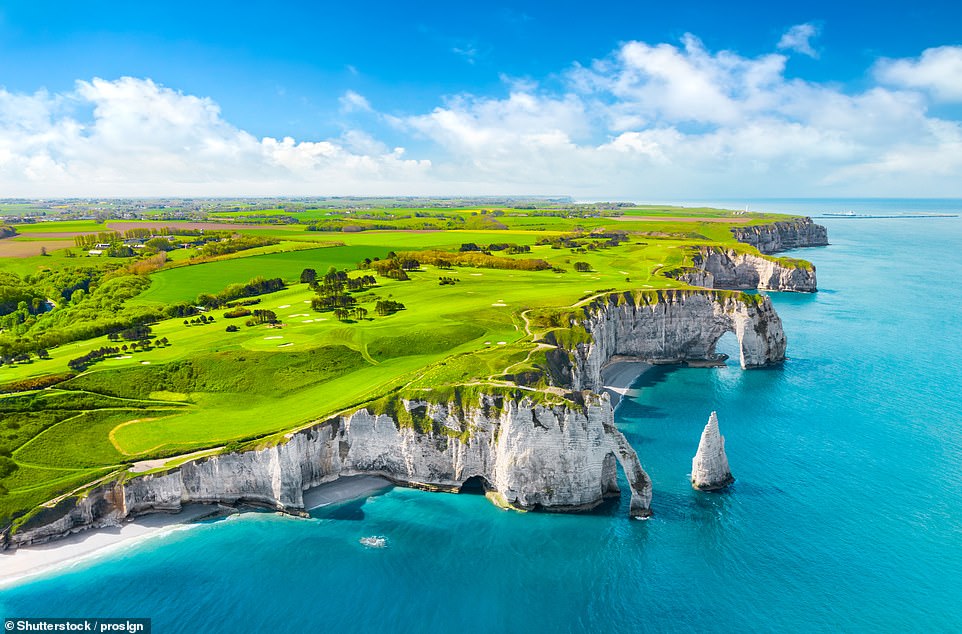 France’s cliffs are also on the ‘No’ list – the coast of Etretat (above) in Normandy, France, faces ‘frequent landslides from too much foot traffic’ from travellers

You’ll find France’s cliffs and Calanques (a type of rocky, steep-walled inlet) in the ‘Nature That Needs a Break’ category, with Fodor’s pointing out that the coast of Etretat in Normandy has been ‘hit hard’ by an influx of travellers with ‘frequent landslides from too much foot traffic’.

Lake Tahoe in the Sierra Nevada Mountains of California and Antarctica also come under this category.

Jeremy Tarr, Editorial Director of Fodors.com, explains: ‘This year’s No List does not serve as a boycott, ban, or cancellation of any sort, but a call to travellers to consider wisely the choices we make.’ 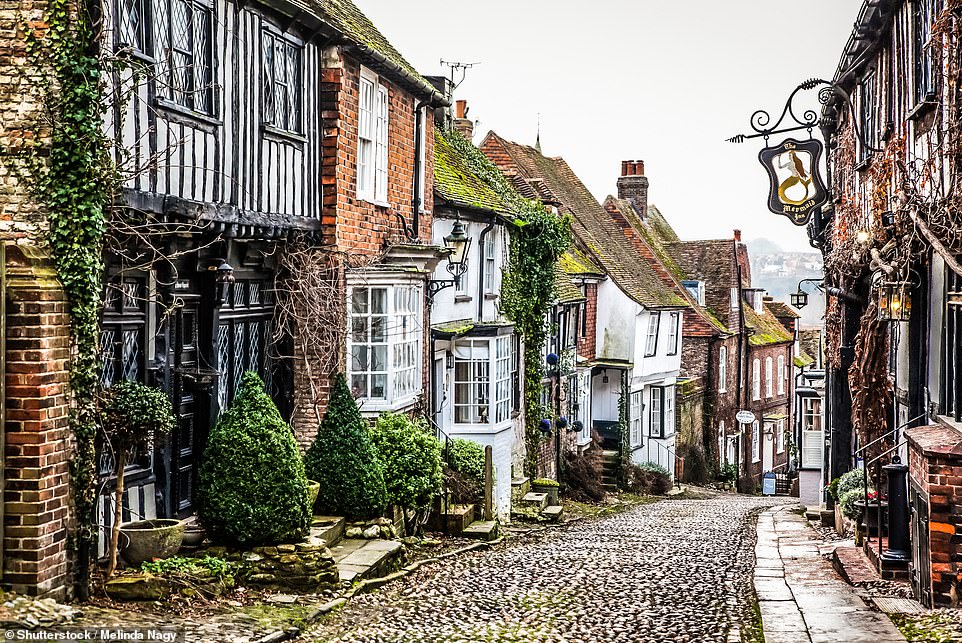 Fodor’s ‘Go’ list gives the green light to travel to destinations such as Rye in East Sussex, England (above) 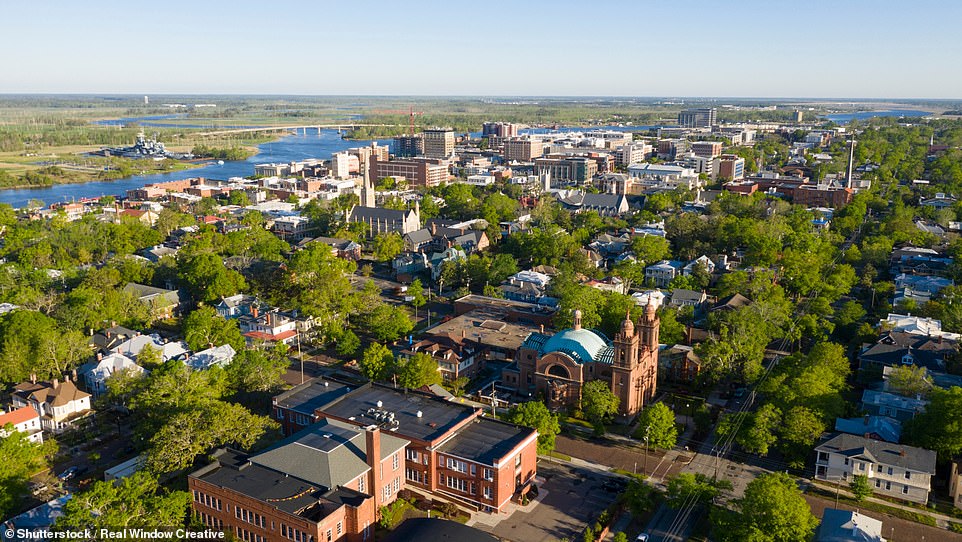 Six North American destinations make it onto the ‘Go’ list, including the ‘surprisingly funky’ city of Wilmington, North Carolina (above)

Forty places that cover ‘the far reaches of this weird and wonderful world’ make up Fodor’s Travel Go List for 2023.

North America performs very well, with six destinations making it onto the list. As well as Wilmington – billed as a ‘surprisingly funky’ city that’s ‘warm, welcoming, and full of hospitality’ – there’s Iowa City, Iowa; Saskatchewan, Canada; and Louisiana’s Atchafalaya Basin, among others.

Fodor’s praises the East Sussex port town of Rye for its proximity to the coast and its cobblestone streets ‘lined with medieval houses and other ancient dwellings… which have a way of sucking visitors into its fascinating, historical past’.

In Cairns, it recommends snorkelling in the Great Barrier Reef, experiencing ancient rainforests, and learning about Indigenous cultures. 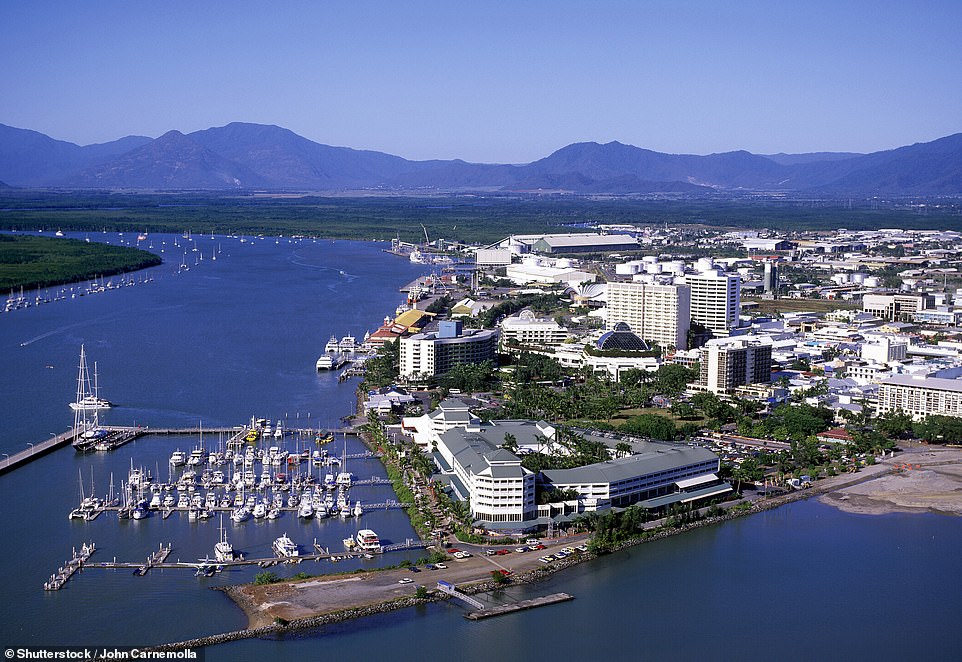 On a visit to Cairns, Australia (above), Fodor’s recommends going snorkelling in the Great Barrier Reef 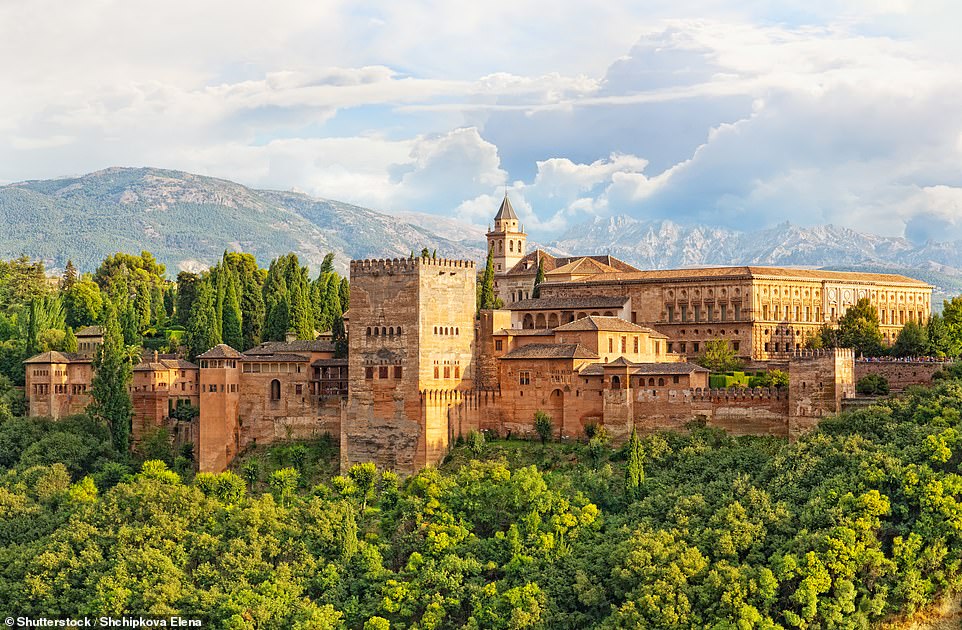 The ‘smells of free tapas drift through the streets’ in Granada, Spain. Pictured is the city’s iconic Alhambra fortress 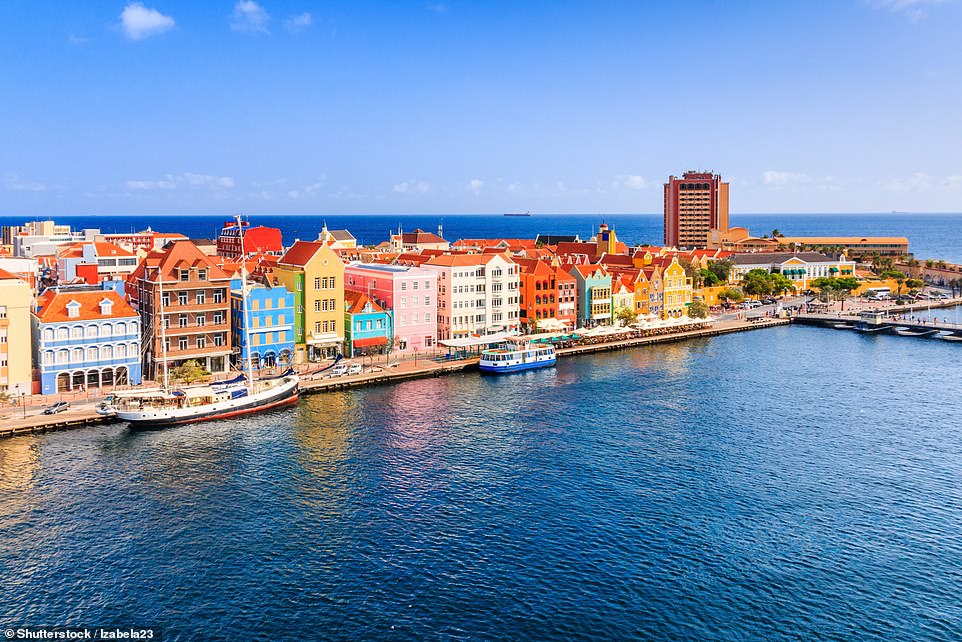 The Dutch Caribbean island of Curacao has a ‘legendary underwater world of deep reefs’. Above is the country’s capital, Willemstad

Other hotspots to make the cut include Granada, Spain – ‘where the sounds of flamenco can be heard echoing through the night, and the smells of free tapas drift through the streets’ – and the Dutch Caribbean island of Curacao, which Fodor’s describes as having a ‘legendary underwater world of deep reefs’.

Another recommended destination is Bangladesh – Fodor’s says that while it’s usually overlooked by travellers in favour of its neighbour, India, the country is ‘sprinkled with Mughal and British Raj-era architecture, stuffed with atmospheric bazaars, and famed for its rivers’. 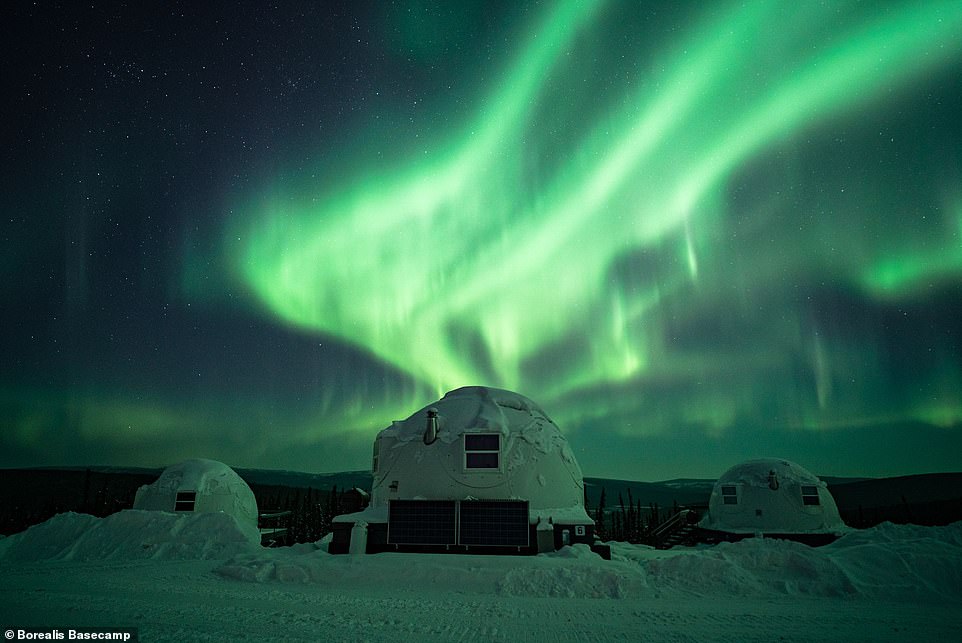 Guests staying at Borealis Basecamp in Fairbanks, Alaska, can watch the Northern Lights from bed

The Fodor’s Finest Hotels list for 2023 puts a focus on 92 properties across the globe ‘for nearly every budget’ that boast ‘unapologetic, immersive design’.

Tarr explains: ‘Many of our favourite hotels this year are maximalist fever dreams, dripping with psychedelic wonderment. Others boast their boldness with elegant, soothing decor and the meticulousness of minimalism. The design philosophies may seem disparate, but they have the same goal in mind. All of them want you to feel inspired, stimulated, serene, transported.’

Borealis Basecamp in Fairbanks, Alaska, provides the ‘ultimate luxury’ in the middle of Alaska’s Arctic tundra, says Fodor’s, noting that the hotel’s private igloos have windows in the roofs that allow guests to watch the Northern Lights from bed. 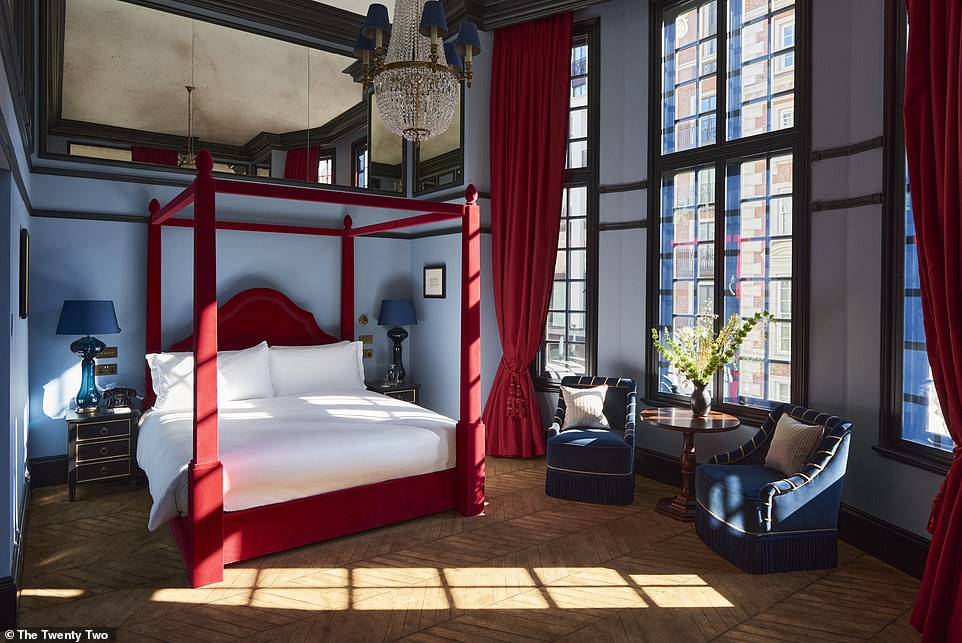 ‘Opulence is king here and covers every corner of the manor,’ says Fodor’s of London’s The Twenty Two (above)

Columns in New Orleans, Louisiana, is another must-visit hotel, according to Fodor’s – the Italianate mansion, built in 1883, is hailed as ‘the epitome of southern charm’.

Meanwhile, London’s The Twenty Two is a Mayfair bolthole inspired by 18th-century France’s grandeur. ‘Opulence is king here and covers every corner of the manor,’ says Fodor’s.

Elsewhere in Europe, Hotel Imperial in the Austrian capital makes it onto the list, with Fodor’s describing the 19th-century palace as a Viennese landmark with chandeliers and marble baths in the guest rooms. 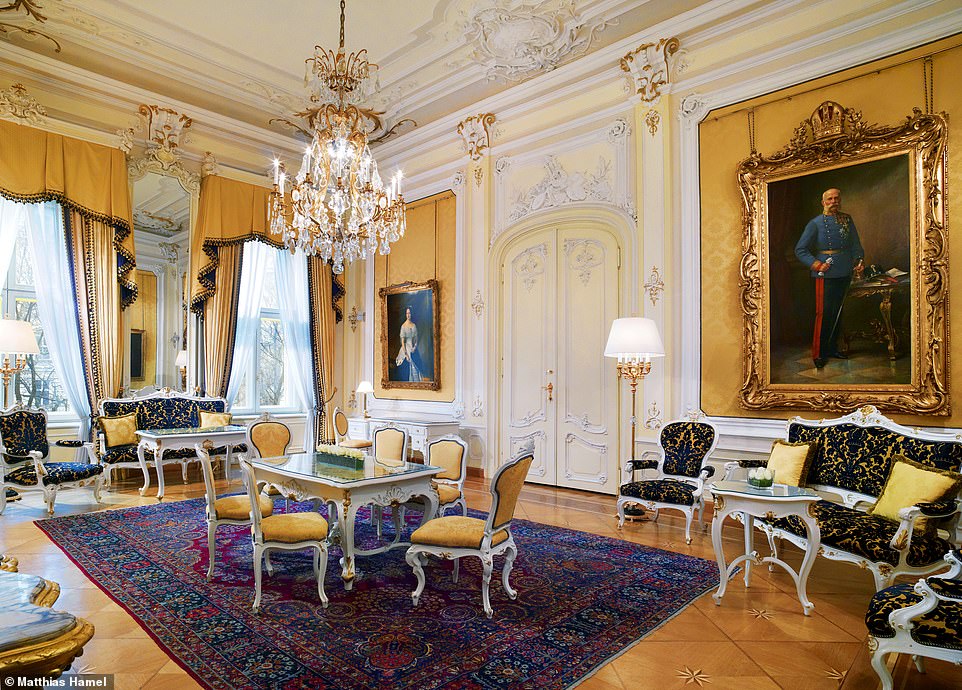 The 19th-century Hotel Imperial in the Austrian capital is described as a ‘Viennese landmark’. Above is the salon in the hotel’s Royal Suite 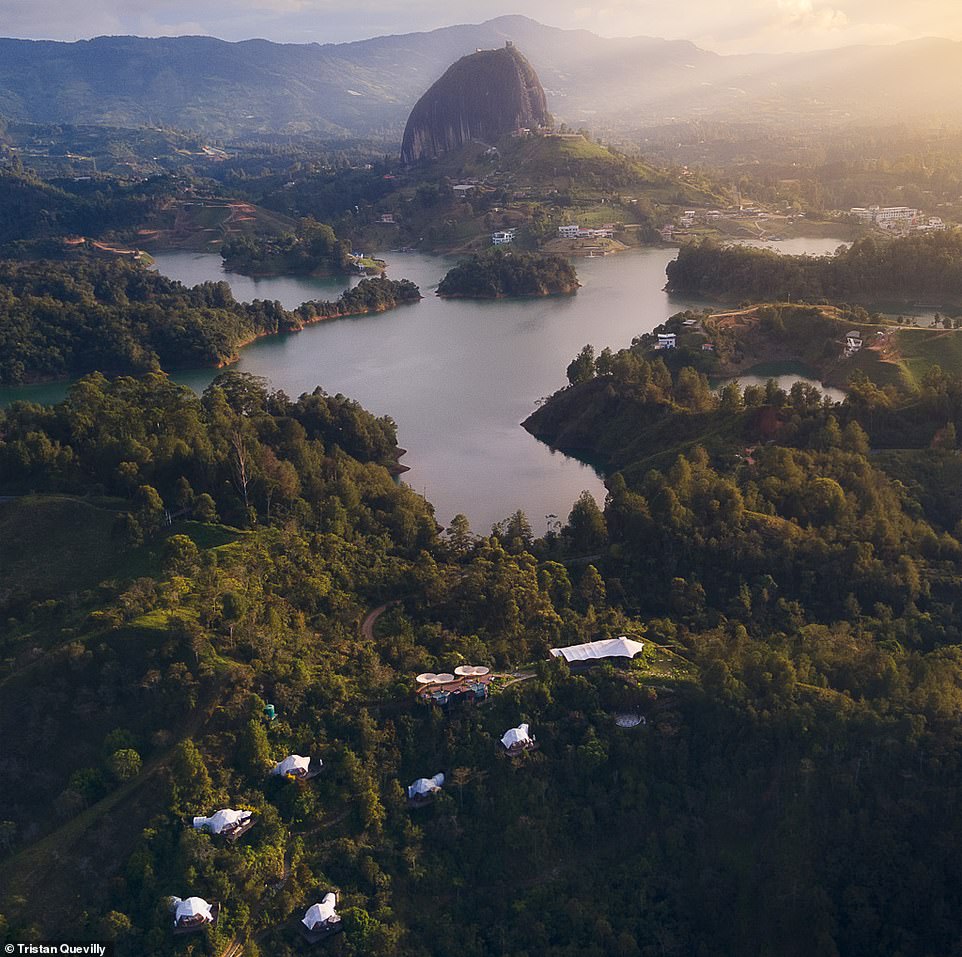 Luxury glamping site Bosko (pictured in the foreground) in Guatape, Colombia, gives guests the ‘feeling of being integrated into nature’ 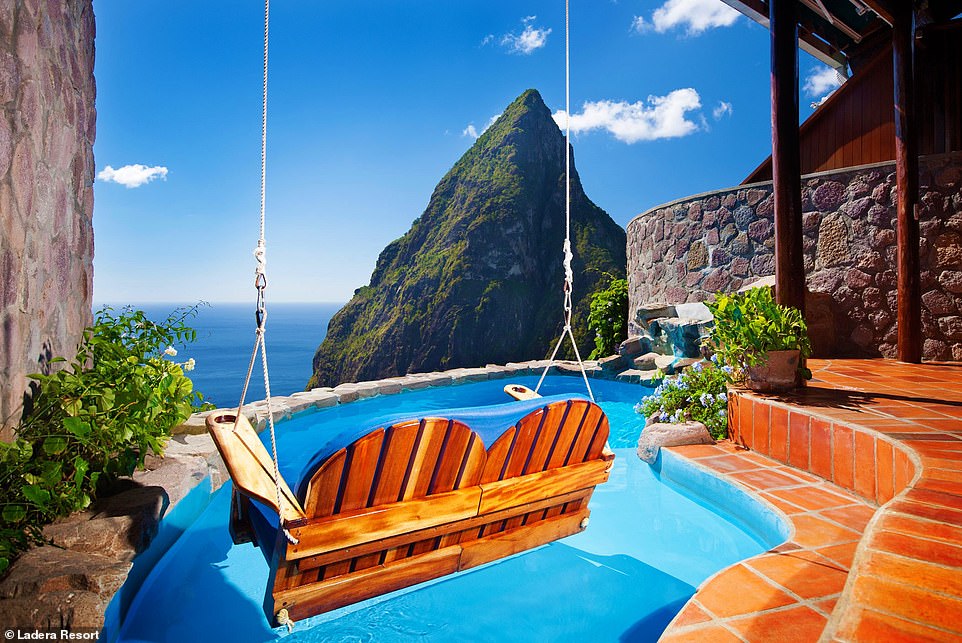 Down Under, Emirates One&Only Wolgan Valley in Australia’s New South Wales is similarly worth a visit, according to Fodor’s. ‘Set within the sweeping Wolgan Valley, part of the Greater Blue Mountains World Heritage Area, this resort is an impeccable retreat from city life, immersing guests in the Australian landscape,’ it says.

For luxury glamping, head to Bosko in Guatape, Colombia, where raised domes ‘scattered through the forest blend in with their surroundings, providing guests with the feeling of being integrated into nature’.

Those dreaming of a Caribbean getaway ought to head to Ladera Resort in St Lucia – guests are treated to unobstructed views of St Lucia’s iconic Piton mountains from the hotel, Fodor’s reveals.

FODOR’S TRAVEL GO AND NO LISTS 2023, PLUS ‘THE 92 MOST INCREDIBLE HOTELS IN THE WORLD’

Italy’s popular tourist destinations, including Venice and the Amalfi Coast

Thailand, including Maya Bay, Phi Phi Leh, and the island of Koh Tao

Nature That Needs a Break

Best Hotels in the U.S

The Inn of the Five Graces — Santa Fe, New Mexico

Best Hotels in the Caribbean

Best Hotels in the Middle East