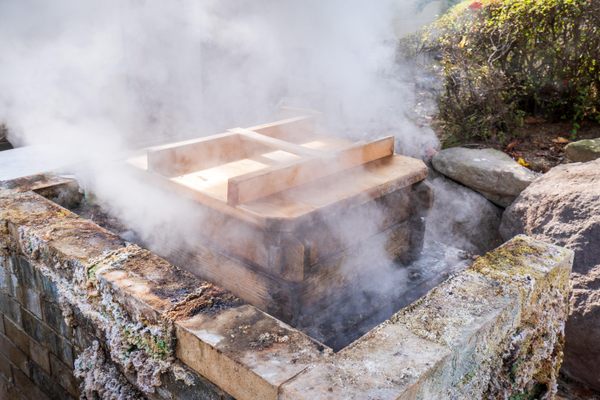 Wandering through the small, labyrinthian Kannawa neighborhood in Beppu City is nothing short of dreamlike. Steam spews in dramatic, billowing clouds from hot-spring vents into the sky. Wisps of steam hiss and curl around you, rising from drain pipes and cracks in the road as though the streets are a giant sauna.

Beppu is home to the highest concentration of hot springs in Japan: More than 100,000 liters of water gush from its 2,300-odd hot spring sources each minute. But besides being a bather’s paradise, the city is known for its high-temperature geothermal hotspots—known as “hells”—and a local culinary custom making use of its abundant hot springs known as jigoku-mushi, or hell-steaming.

Scattered around Kannawa, you’ll find large, box-like chambers made of brick or concrete with rows of wooden lids on top. These are jigoku-gama, or “hell ovens.” Typically made of stone or brick and sometimes reinforced with concrete, these chambers are designed to channel geothermal steam from hot-spring sources underground. To use one, you usually twist a valve to release massive jets of super-hot, mineral-rich geothermal steam, which also imbues food with a subtle kiss of sodium chloride.

Your geothermal banquet is limited only by your imagination: A basket of freshly-caught prawns and mussels would be a fine choice, as would seasonal vegetables, bamboo leaf–wrapped glutinous rice, or sake-marinated sea bream. Place your ingredients in a basket, lower it into the oven, cover with a lid, and let the boiling-hot steam work its magic. Steaming time varies by ingredient, but when you retrieve the basket, you’ll be rewarded with food that tastes like the best version of itself, the steam bringing out its subtle flavors and imparting a tinge of saltiness.

For restaurant owner and Kannawa native Haruko Yasunami, hell-steaming was part of daily life when she was growing up. She remembers visiting Daikoku-ya—one of the local inns—every spring with her neighbors. She’d bring a bushel of young bamboo shoots gathered from the hill near her family’s house, for