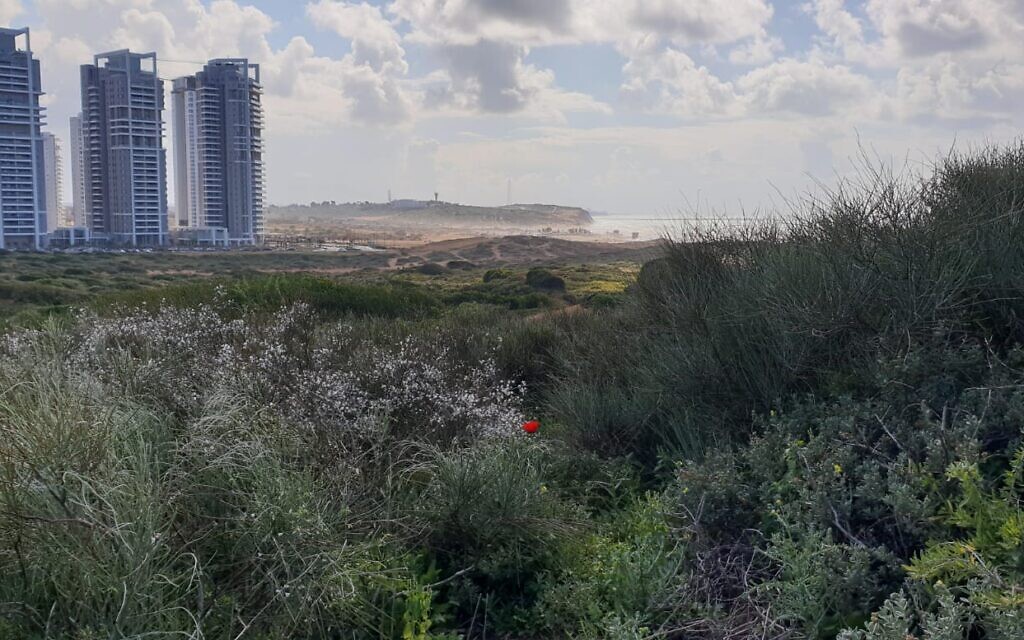 Locals say a plan to build a large hotel and shopping complex near the beach on the southern edge of Netanya does not go far enough to protect ecosystems and violates promises made by the city.

The 613 dunam (150 acre) plan for the popular Poleg beach, which was approved by local and district planning authorities in 2013, is slated to include six hotels of eight to 11 stories, as well as room for shopping, parking and a field for beach soccer.

The development will fill in almost all of the remaining open space between the Poleg Nature Reserve and the iris reserve, the latter a municipal tract of land famed for the flowering of the critically endangered coastal iris, which only grows in Israel. The iris reserve is also linked to one of Israel’s only remaining vernal (seasonal) ponds, making the area critically important from an environmental standpoint.

While the plan includes a thin ecological corridor running parallel to the sea, between the development and the public beach, critics say the ribbon of land is not only not wide enough to serve all of the animals that frequent the area, from deer to hedgehogs, but is also not long enough to actually link the nature and iris reserves in one continuous belt.

On Sunday, residents, environmental groups and others will take what they hope is a major step toward sending the entire development back to the drawing board when they appear before Lod’s District Court.

Residents, joined in their petition by Society for the Protection of Nature in Israel and the environmental law organization Adam Teva V’Din, will argue that the city’s advancement of the project violates a 2002 agreement to completely reconsider, as part of one single, holistic plan, the whole area stretching between the boundaries of the two reserves, to survey the environmental impact of the plans and to provide alternatives from which to choose. The whole plan needs to be completely redone, they